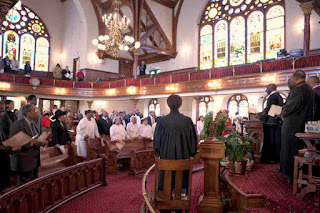 On the 200th anniversary of its founding, Philadelphia’s Mother Bethel African Methodist Episcopal (A.M.E.) Church and the United States Postal Service unveiled the Richard Allen Forever Stamp, memorializing the church’s eminent and heroic founder and bishop, activist and civic leader. The Black Heritage stamp’s unveiling ceremony took place in early February, during Black History Month, in the historic church at the corner of 6th and Lombard Streets in Philadelphia.

Langhorne Carpets was proud to be underfoot at that moment — and other special moments at Mother Bethel A.M.E. Two decades ago, Mother Bethel engaged the heritage Bucks County carpet mill to design and create a custom reproduction for the circa 1888 sanctuary floor. That carpet, a geometric repeat in six colors, including a rich red background, remains there today.

Mill co-owner Bill Morrow joyfully remembers when he and his team were tasked with creating a carpet to befit the worship hall of one of America’s religious jewels. “It was the mid-1990s,” he recalls, “The church was undergoing restoration. We came in, looked beneath the pews, and pulled up layer upon layer upon layer of carpet until we got to the bottom.” A half dozen layers down, the Langhorne team discovered a textile that, estimates Morrow, dates back to the 19th Century. 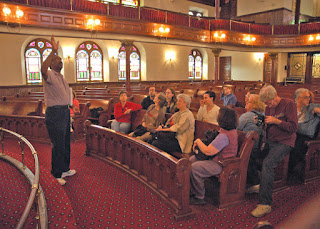 Such historic reproduction work is always special for Langhorne — but it’s not unusual for the circa 1930 Wilton Jacquard mill. The family owned-and-operated business has long of working on historic preservationists projects, painstakingly recreating century-plus-old floor coverings. Among the sites where you’ll find Langhorne’s custom reproductions: Philadelphia’s Congress Hall, the Martin Van Buren House in Kinderhook, NY, Winterthur Country Estate in Wilmington, DE, the Blair House in Washington, D.C. and the Commonwealth of Massachusetts’ Old Boston State House, to name a few.
Posted by Langhorne Carpets at 7:14 AM 3 comments: